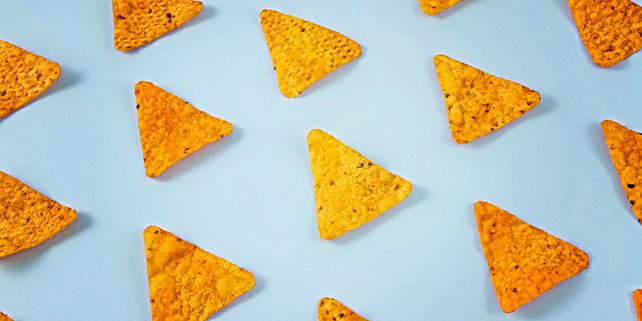 What’s in a name?  In a new advertisement, Frito-Lay, maker of Doritos, bets / That which we call a Dorito / By any other name would taste as sweet.  Or, for that matter, by no name at all…

The snack giant’s new online ad, which appeared in the lead-up to the 2019 MTV Video Music Awards, features just about every characteristic of the classic nacho-cheese-flavored crisp (what IP lawyers would call its “trade dress”).  Cheesy flavor? Check. Trianglular shape? Check. Orange finger tips? That could be Cheetos, but ok. Rhymes with “I need those?” You get the point. The one glaring omission in this parade of suggestion is the actual name of the product: Doritos.

It may seem counterintuitive, but this “anti-ad” is part of a broader marketing ploy on behalf of the Doritos brand.  The campaign, called “Another Level,” aims squarely at the skepticism of Generation Z, whose members have never been without the internet, or the interminable dross of advertisements that come with it.  On the whole, these young people in their late-teens and early-20s tend to distrust overt corporate advertising.

The campaign’s effectiveness aside, it is interesting from a legal perspective because of its twist on trademark law.  The underlying purpose of trademark law is to protect consumers by granting legal protection to indicators of source, such as brand names.  (For a deeper dive into this, check out our blog post about trademarking scents).  Companies that produce goods and services are awarded exclusive use of their trademark or brand name in connection with their particular goods or services because it allows consumers to be confident that they are buying the real deal.  Accordingly, companies usually feature their brand name front and center.

The new Doritos campaign, however, does the opposite; it omits the brand name (the trademark) and instead relies on Doritos’ trade dress to alert consumers as to the source of the product.

Trade dress refers to the various elements that make up a product or service, which collectively indicate its source.  These elements can include product packaging, display, or in some cases even the shape or configuration of the product itself.  Think of the classic coke bottle –– the shape of the glass, the reddish-brown carbonated liquid inside, the red cap –– even without a Coca-Cola label, you would almost instantly be tipped off that you are about to enjoy an ice cold Coke®.  This is the power of trade dress. Because it instills confidence in consumers that they are getting the real thing, it is just as protectable as the actual brand name. In its new ad campaign, Doritos is harnessing this power to appeal to a new generation.

So if you see one of the new Doritos ads, pay attention to all the elements they use to identify their product; for a simple corn chip with nacho cheese flavoring, it sure is a long list.